Bluewater Maribago Beach Resort, more commonly known to Cebuanos as "Maribago" has been around since the longest I can remember. I've spent some of my childhood there and still visit probably at least twice a year. It is known to be the resort with a pond of baby sharks that they tend.

Maribago in Mactan, Cebu is the first establishment of the Bluewater Resorts. They eventually branched out to Sumilon Island in Oslob, Cebu and fairly recently at Panglao, Bohol. For more than two decades, Bluewater Resorts made a reputation for creating a unique collection of resort properties that are professionally-run, with world-class amenities and distinctly Filipino.

I am more than excited to share with you my experience at the young Bluewater Panglao's 2nd Anniversary on July 31. I had the honor of being invited to their anniversary celebration with the privilege of an overnight stay, transportation and accommodation expenses taken cared of. This was my first out-of-town trip for blogging! Woot Woot! And coincidentally, it was just two days before my birthday so it really felt like an advance celebration. I honestly cannot believe it happened until now. :D

Bluewater Panglao celebrated their 2nd Anniversary with Chef Sau del Rosario as guest chef for their culinary series, Northern Exposure, where they bring the country's Northern flavors to Panglao for the locals to experience. It was a 4-day event from July 31 to August 3 with special nightly dinner buffets at the Aplaya Restaurant featuring Chef Sau's culinary creations for only P1,000 nett per person. They also offered special room rates as an anniversary treat at P8,000 nett, inclusive of breakfast, dinner and airport/seaport transfers.

This was my first time to finally set foot in Bohol and unfortunately, I had the worst boat ride of my life getting there. The waves were really rocking the boat and though I'm not one to succumb to motion sickness, I was more than vulnerable. However, when we arrived at the resort, I was met with fresh air and lush greenery. And the sight of the enormous glittering pool in between the deluxe rooms awaiting the guests instantly comforted me. 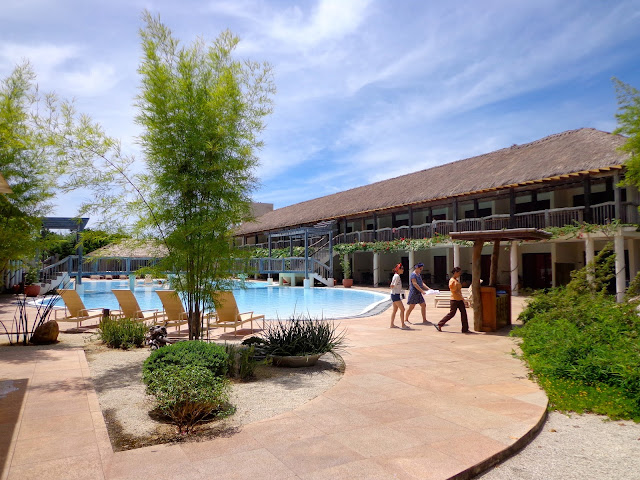 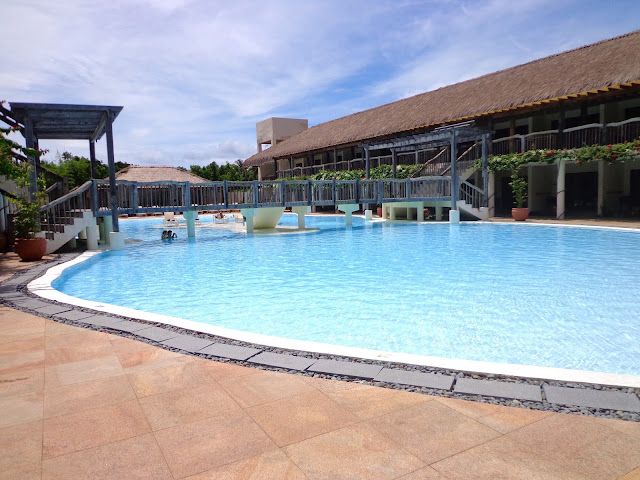 On our way to Aplaya Restaurant for lunch, we walked through a beautiful garden. I loved that the resto was fronting the beach. It was during this lunch that I found out I was the only blogger amid the rest of the media guests from Manila and Cebu. We were served some of the specialties of the house such as Adobo Rice, Hinalang na Manok and Lechon Kawali. Too bad I didn't get to take photos of our lunch because I forgot (argh! hated myself for it) to charge my camera so I had to save the most of my battery for dinner. All the dishes served were excellently prepared. Each dish was top quality even if they were simple Filipino fare. 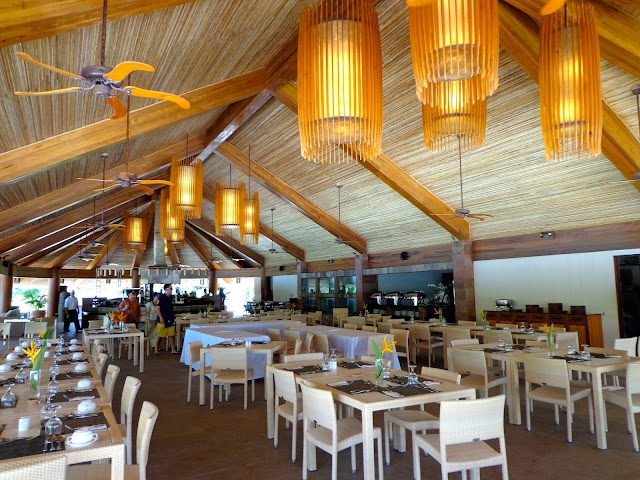 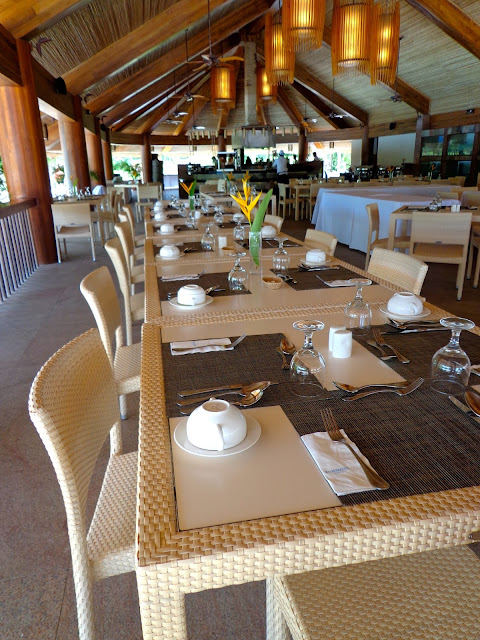 Retiring to my room after lunch, I savored the luxury around me. It was a double bed room with two queen-sized beds, a dresser, flat screen TV, and... I have a fetish for pretty bathrooms. As soon as you enter the room, the bath tub is probably the first thing you'll notice. The bathroom had stone tiles and a slim glass panel above one side of the tub and shower to allow natural lighting during daytime. The zen design definitely relaxes one who steps into the bathroom. I also loved the modern touch on the bed that was seemingly floating. 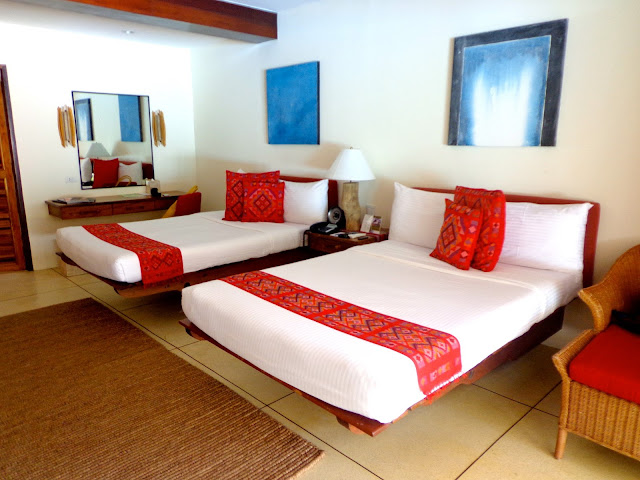 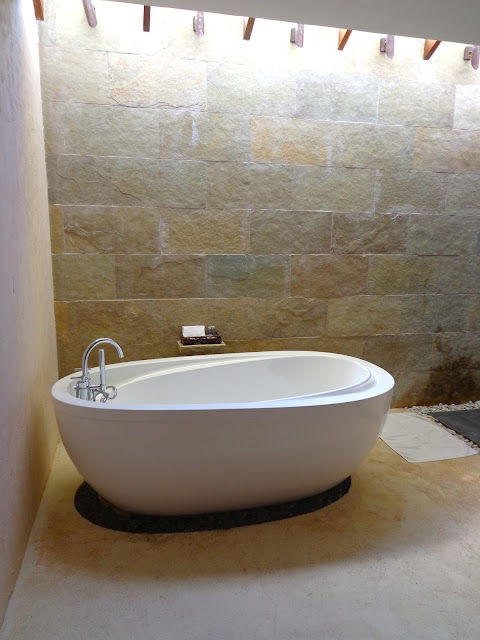 After some beauty sleep, I was eager to finally meet Chef Sau del Rosario back at the Aplaya Restaurant for dinner. 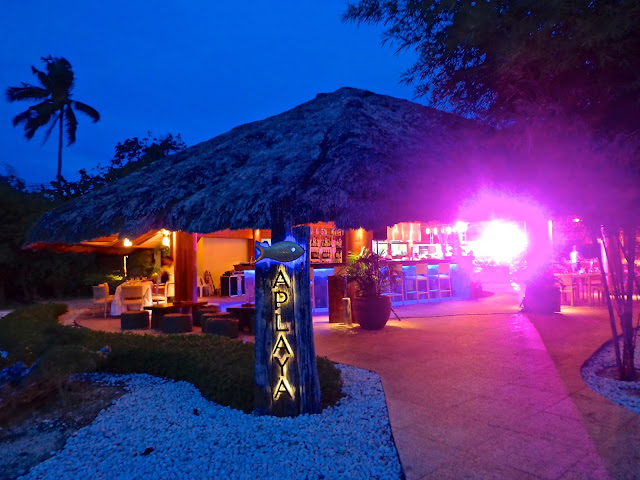 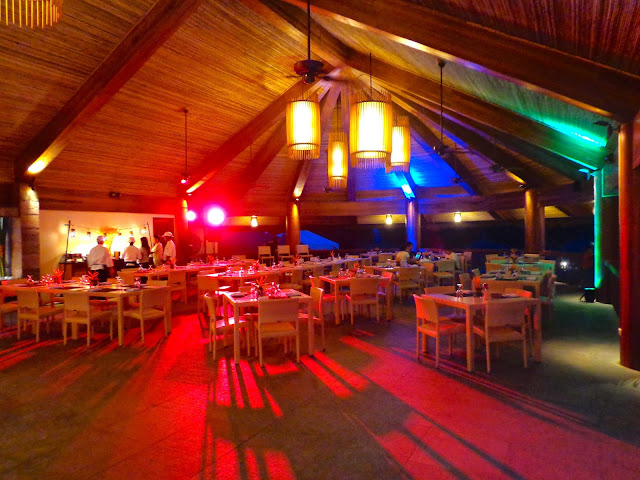 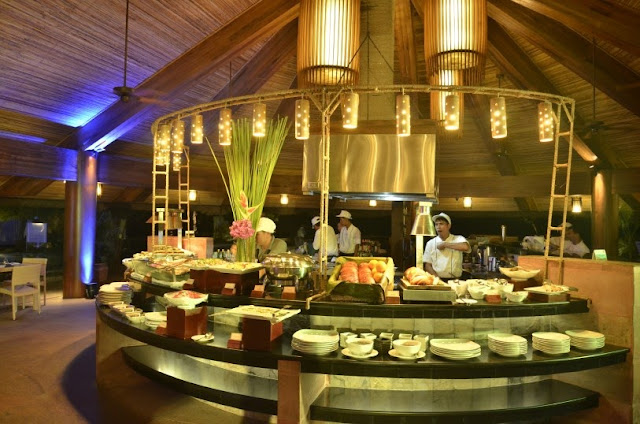 Chef Sau is a celebrated chef in Manila, who I was only familiar with because of Selecta's Premium Gold commercial although he is the product ambassador of many other brands such as Philips My Kitchen Appliances, Elba Premium Gas Range, Globe, Samsung, Titania, Beringer Wines and Bounty Fresh Chicken.

He is French-trained and was born and raised in Pampanga, the country's capital of gastronomy. He took his professional training in Nice, South of France, under the guidance of Michelin Chef Christian Plumail of Restaurant L'univers. He took a job in the prestigious three Michelin star restaurant Le Divellec in Paris the following year before moving to China to open Luna in Shanghai. After two years in Shanghai, he took the job as Chef de Cuisine of the famous Raffles Chain's Equinox. In 2005, Sau heeded the call from Manila and opened M Cafe, Chelsea, Madison Grill, Le Bistro Vert and Toro. Villa Cafe in Makati is Chef Sau's latest venture. He was also visible in television doing cooking shows like The Secrets of the Masters, Healthy Cravings, Kitchen Battles and the latest, Sarap to Heart.

I've been hearing from the Bluewater management that Chef Sau is very down-to-earth and approachable. Indeed, from the moment I listened to his welcome speech, to conversing with him, he is a rare find. It’s unbelievable how humble and accommodating this accomplished man is. I’ve also read on Our Awesome Planet that he is an advocate of sustainable and organic cuisine and he is one of only two chefs in Manila to be known as a “green chef”. Having read about that perked my interest most about Chef Sau.

Chef Sau is an extraordinary chef because he is not in it for fame or money, neither just for the passion. He is a chef for a cause.
I asked him about the sustainability of organic cuisine in the country and he narrated to me how farmers are exploited by large-scale companies that push them to mass-produce vegetables in harmful ways just to keep up with the demands.

So, he goes around the country with a team, educating farmers about the vital essence of organic farming and how to make this their livelihood, such as sun-drying tomatoes and packing them. He has an Eco Store where products from these farmers are sold for their benefit. I was so inspired and amazed by the heart of this chef.

The Sisig with Foie Gras was phenomenal and the Watermelon Atchara was literally a refreshing take on the conventional recipe. I was mesmerized by the intricacies he played with from different cuisines to put Filipino cuisine on a higher pedestal. I cannot reiterate more how inspiring and admirable this noble chef is.


Here were some of Chef Sau's amazing creations at the dinner buffet:


And since you guys are special to me, here's an exclusive footage of the very humble and hands-on Chef Sau cooking us his Sisig with Foie Gras:

Thank you so much, Bluewater Panglao, for letting me experience your luxurious service and delectable dishes. It was a great pleasure meeting the management and of course, Chef Sau del Rosario. Special thanks to Mr. Enrico Monsanto for the invitation. I look forward to going back with family if ever we find ourselves in Panglao. :)

For booking reservations or more information about Bluewater Resorts,
visit their website at: