I’m finally back! (hopefully not just for now)

I’ve missed you all and this blog I call home! We all may have settled into the new year already but the party isn’t over yet for Cebu.

Cebu’s most festive weekend is right around the corner and all hospitality establishments are most probably fully booked by now. This is the time when the metro is teeming with tourists and the traffic is most unbearable. Since you’re reading this post, you’re likely to find yourself in Cebu for the biggest, most awaited street mardi gras in town - SINULOG.

So, now that you’re in my beautiful hometown, I can’t help but recommend the taste of Cebu. Like I always say, “To know Cebu, EAT Cebu!”

The dining establishments in this list would be a shame to miss while you’re here. Read up and find out why... ;)

I think Cebu’s most popular dishes are LECHON and BBQ! So, I’m starting the list with the best places to grab these. :D

1) LECHON
You can’t be in Cebu and miss out on this glorious, whole roasted pig worshipped and revered by many who have tasted it, even Anthony Bourdain himself. Though there are many versions concocted by the competing entrepreneurs, Cebuanos know what Cebu lechon really tastes like. And these, for me, are the most trusted brands available for retail. 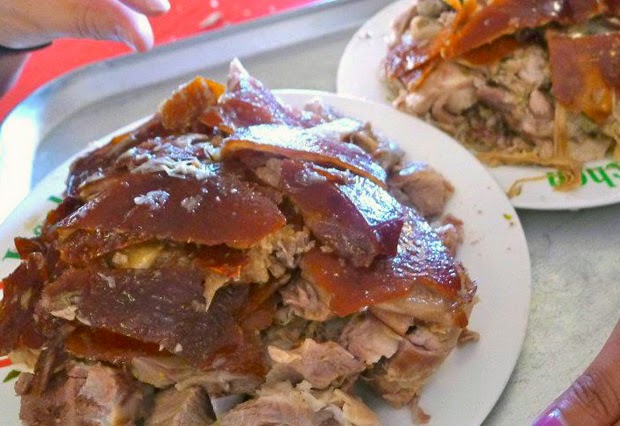 This roast pig family empire has been around since 1987 and has already established themselves as a staple for whoever finds themselves in Cebu as well as for the locals. This is the lechon that deserves to fly back home with you to wherever you're from.

They have several branches around the metro, specifically at Guadalupe, across SM facing Radisson Blu Hotel, and Ayala Center Cebu Food Choices. 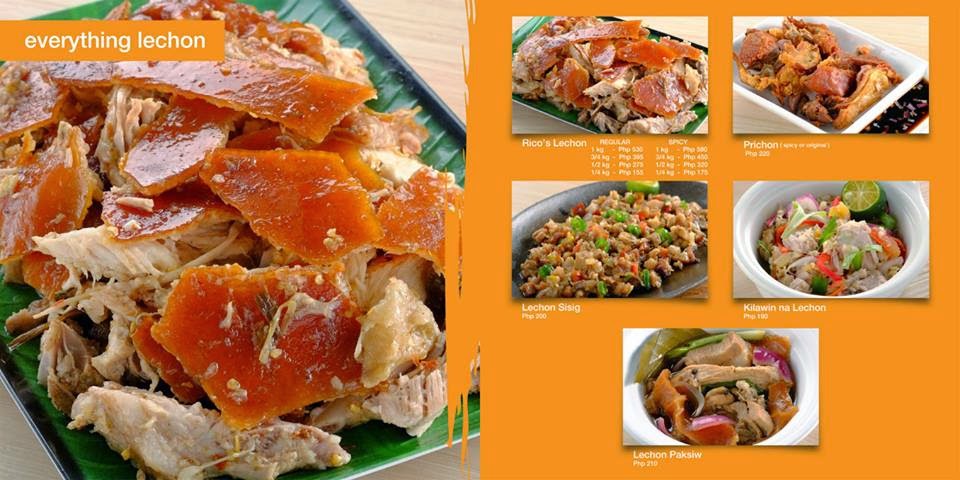 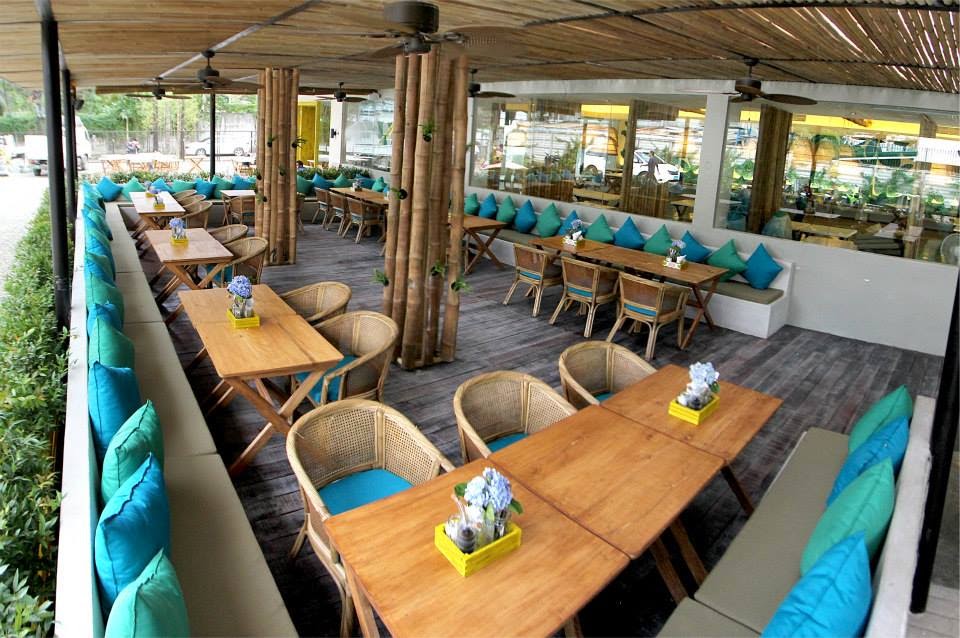 Rico’s has always been my family’s favorite for whole roast pig during special occasions. The skin is distinctly thin, crisp and for some reason, the fat does not seem to attach itself to the skin. Their young suckling pigs (lechon de leche) are also very tender.

They have recently opened a new branch at Escario with a vibrant, charming interior designed by Vito Selma. 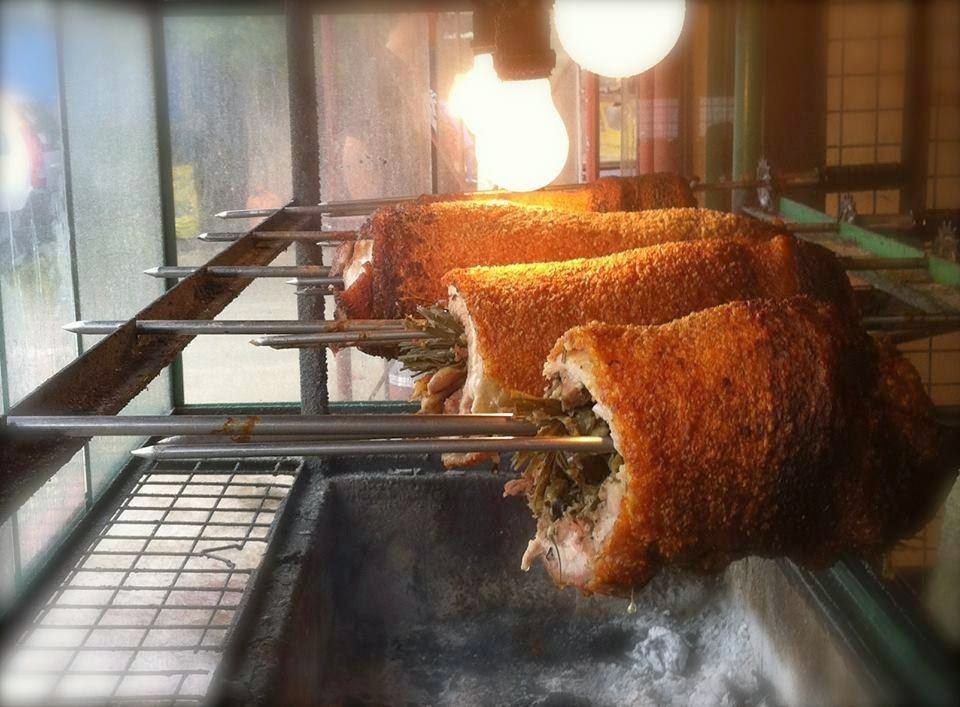 Some people say you cannot put whole lechon and boneless lechon belly under the same category because they somehow don’t have the same taste profile. There’s something about boneless lechon and lechon with bones. Well, I think I agree because the lechon belly is entirely the meaty trunk of the pig stuffed with herbs and spices and roasted whole; there must be a certain, different technique in cooking this innovation. Among the lechon belly players that emerged during its boom last year, Tatang’s has come out as the strongest contender, rolling out probably the crispiest skin and juicy, fragrant, and extra flavorful meat.

2) BBQ
Next to lechon baboy, I think barbecue is an emperor in itself, ruling the streets at sundown. It’s almost impossible to resist these smoky morsels as soon as your nose catches the aroma wafting through the air, as if the burning charcoal is calling you. I love barbeque, particularly chicken barbecue.
Matia’s
Gov. M. Cuenco Ave., Mandaue City, Cebu 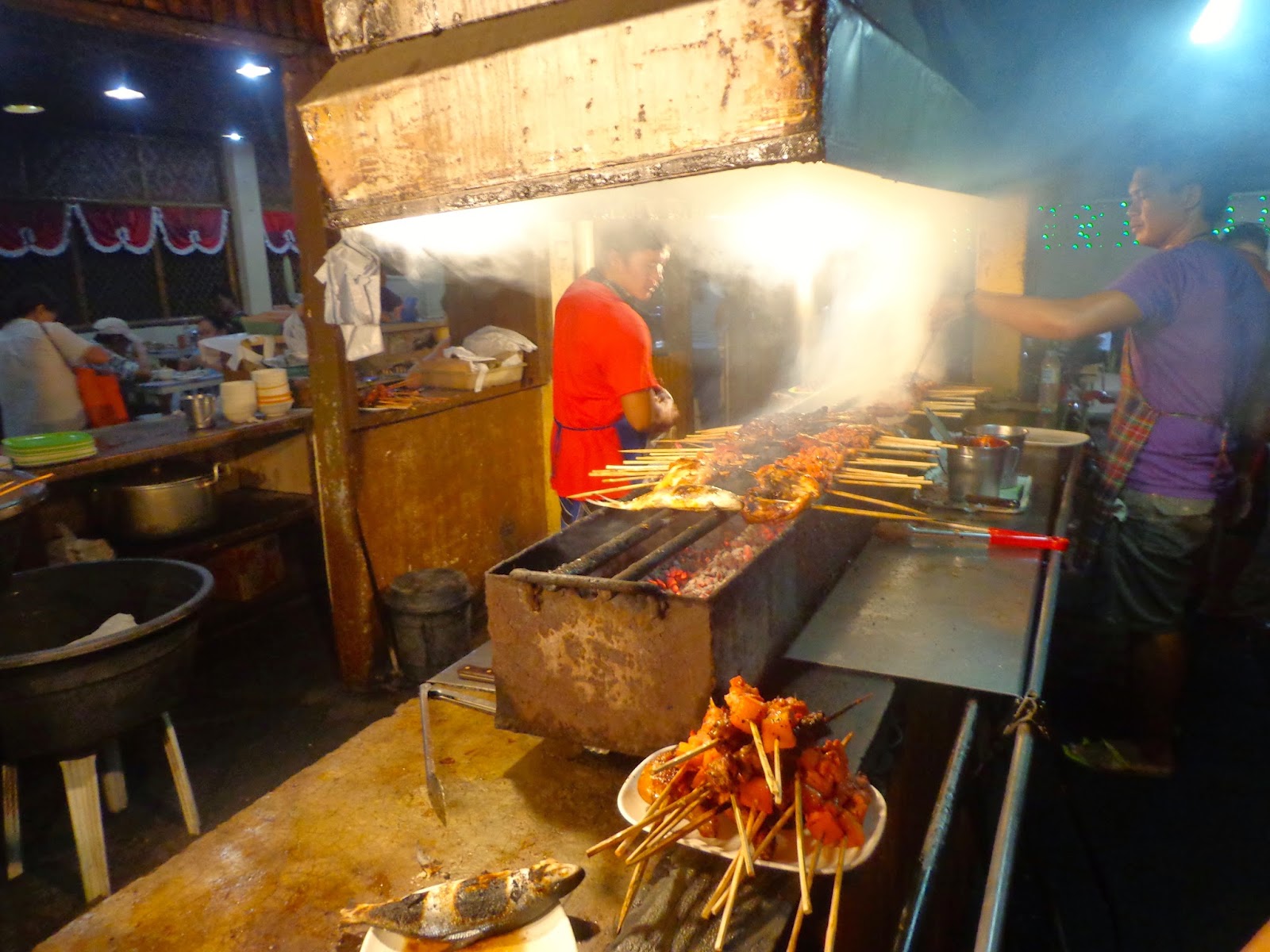 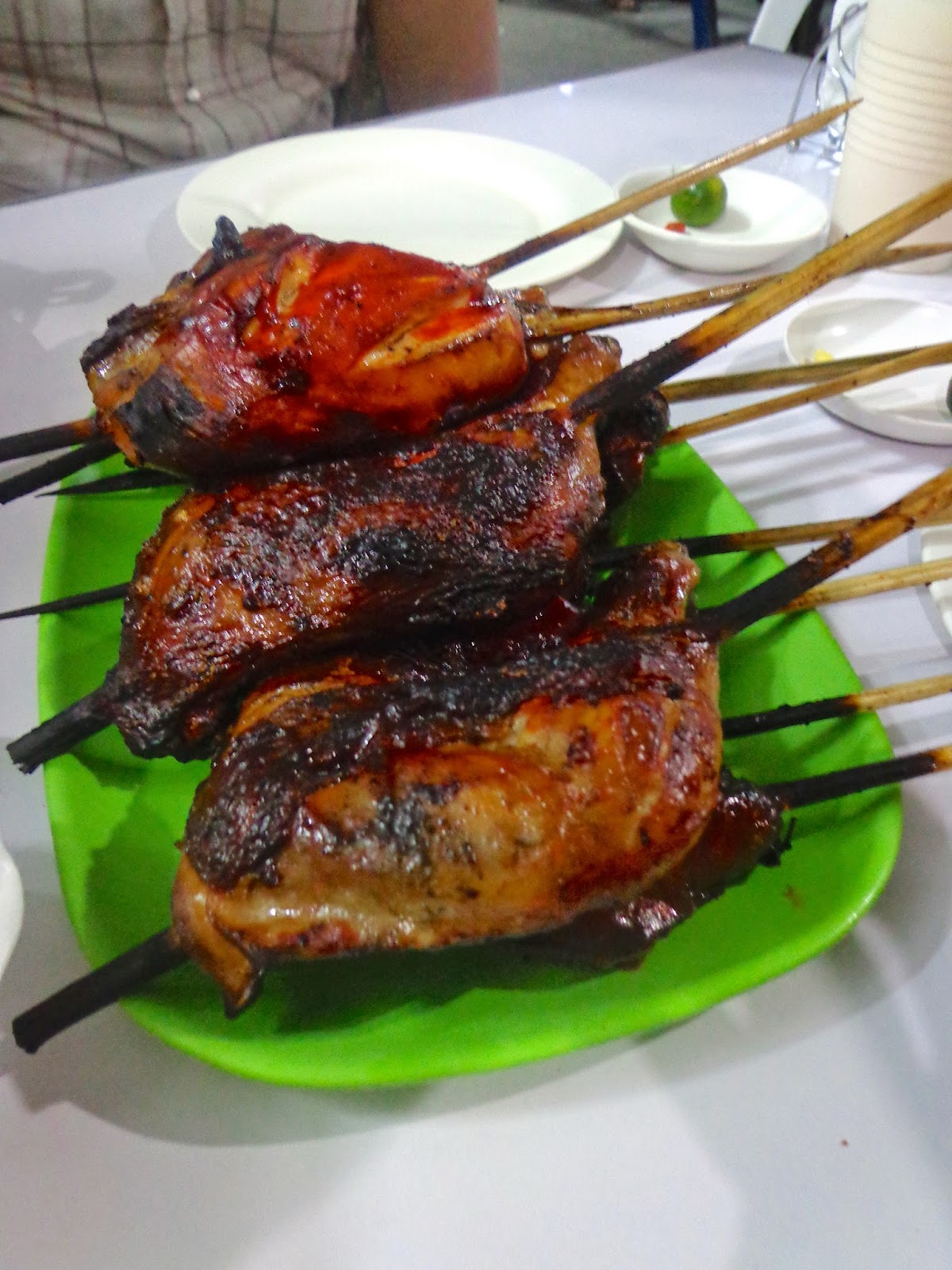 Having mentioned chicken barbecue, this is by far the best chicken barbecue joint in Cebu. This single, home-based establishment never runs out of customers as soon as they open. They’re only open for lunch and dinner and you’d be amazed how people from all walks of life – office workers, students, families, managers and big corporate personalities – would flock over and devour their consistently tasty offerings. Their balbacua (gelatinous, velvety beef skin stewed in a viscous, yellow-green broth) is also a must try but like all popular restaurants, it’s best to be there as early as possible to get dibs on the complete lineup. ;) 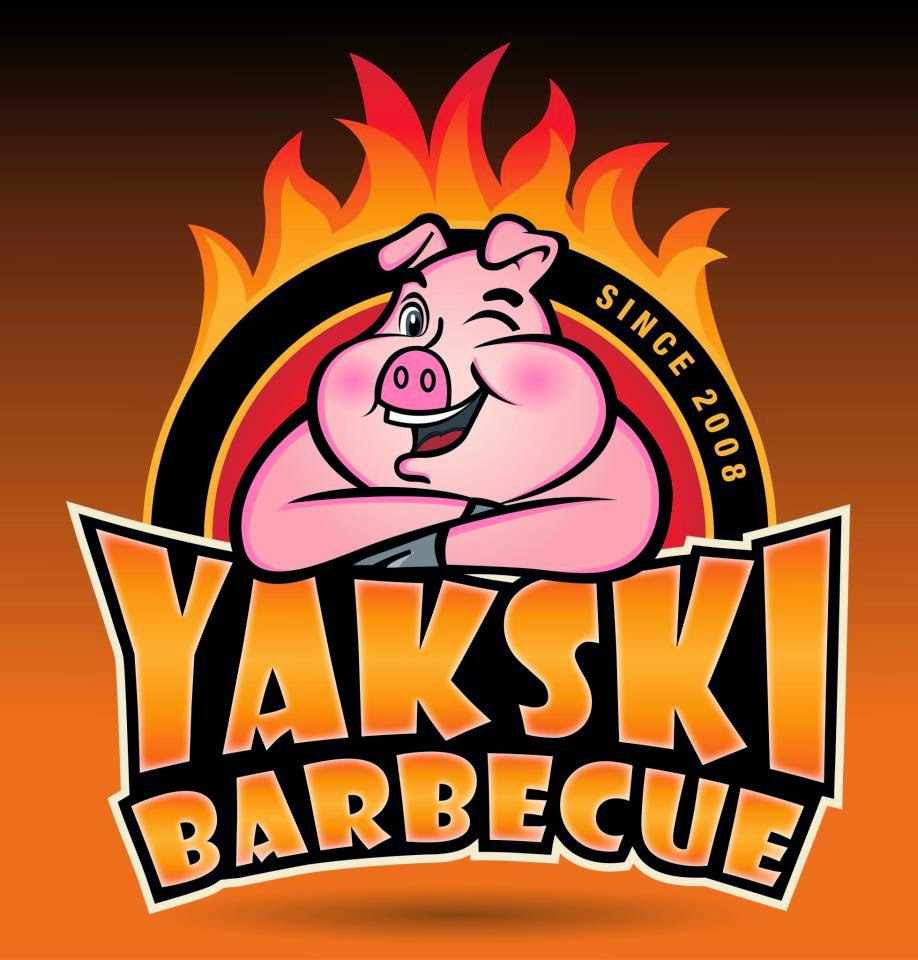 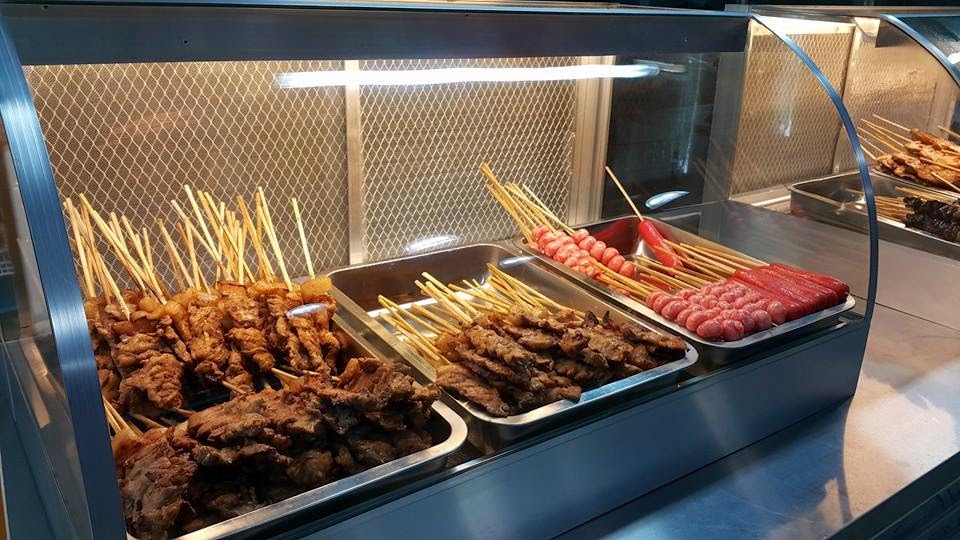 While most tourists are so eager to visit Larsian’s, I would prefer to recommend Yakski’s for its cleaner, more comfortable ambience and service. Locals would say Larsian’s is more of a heritage site for tourists to be spotted at but Yakski’s has better barbecue and this is where most of the locals go for barbecue within the area. The main difference is in the sauce. Yakski’s teriyaki-like sauce is very distinct and will keep you coming back. 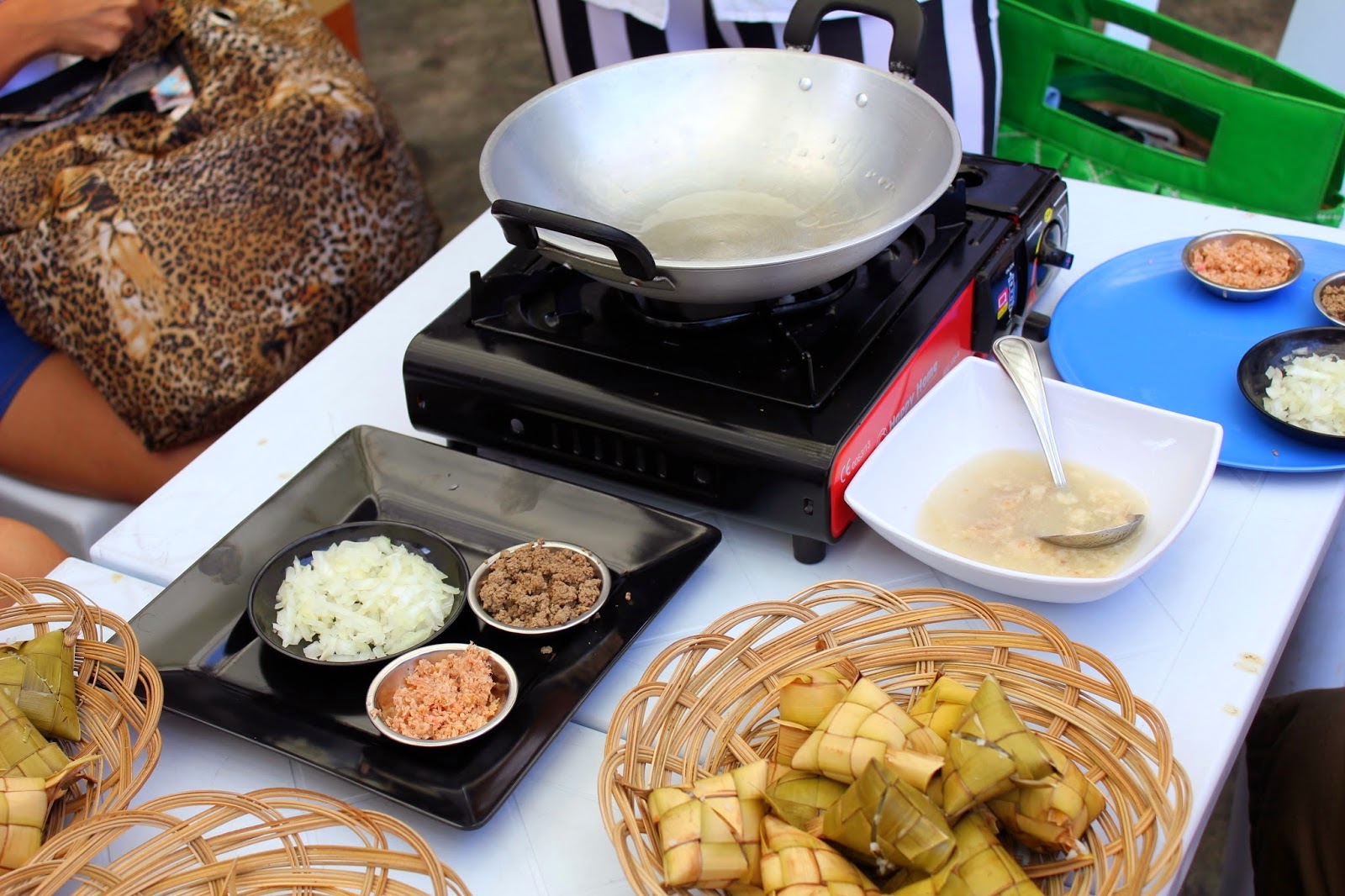 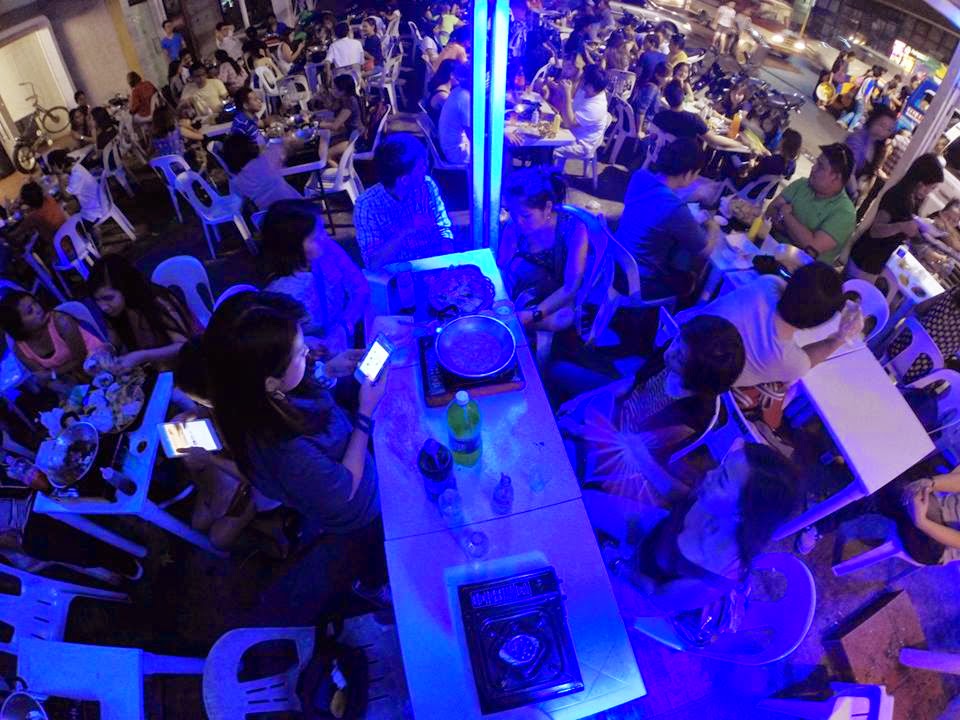 TUSLOB BUWA – this has got to be the most unique food item that Cebu has to offer. What once was poor man’s fare, formerly only found in Pasil, is now a popular trend that many quickly caught on to. But the man who spearheaded this trend, Ian Sekong, is the brainchild of Azul, the place that set the flame ablaze.

I personally like to describe this as Cebu’s very own version of fondue. Instead of dipping bread cubes into melted cheese, puso replaces the bread cubes and is dipped into pork brain paste cooked in its broth, seasoned with chicken liver, onion, dried shrimps, and soy sauce. You can also request for chili flakes to add some heat, which is what I prefer to do. The best part is, you get to cook it yourself; experiential dining at its best! Well, if you can’t, you don’t have to break a sweat. The waiters can do it for you. ;) 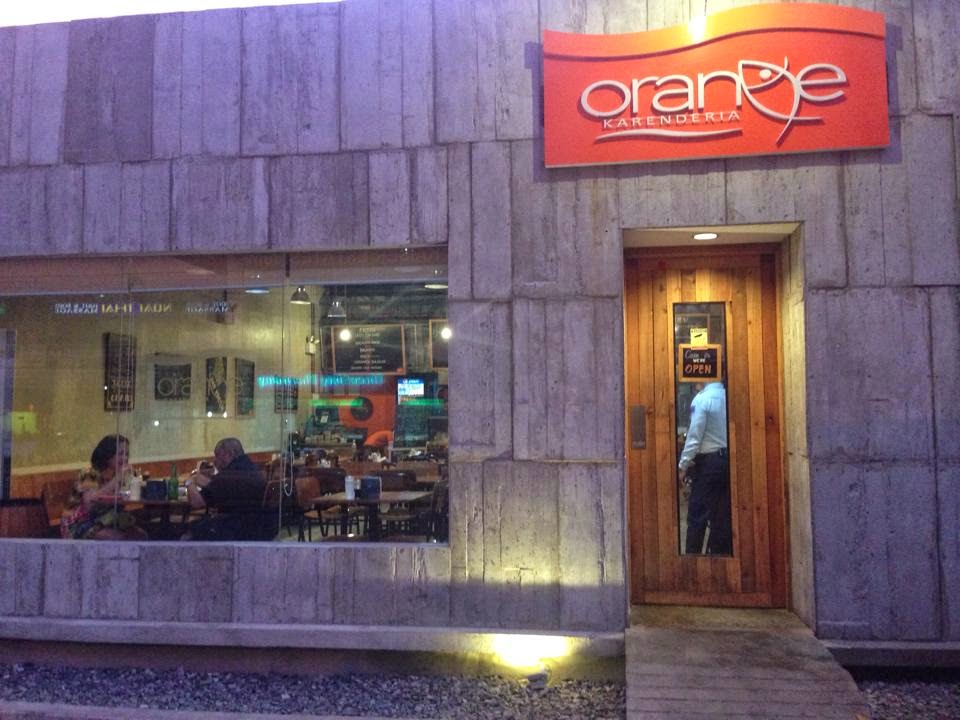 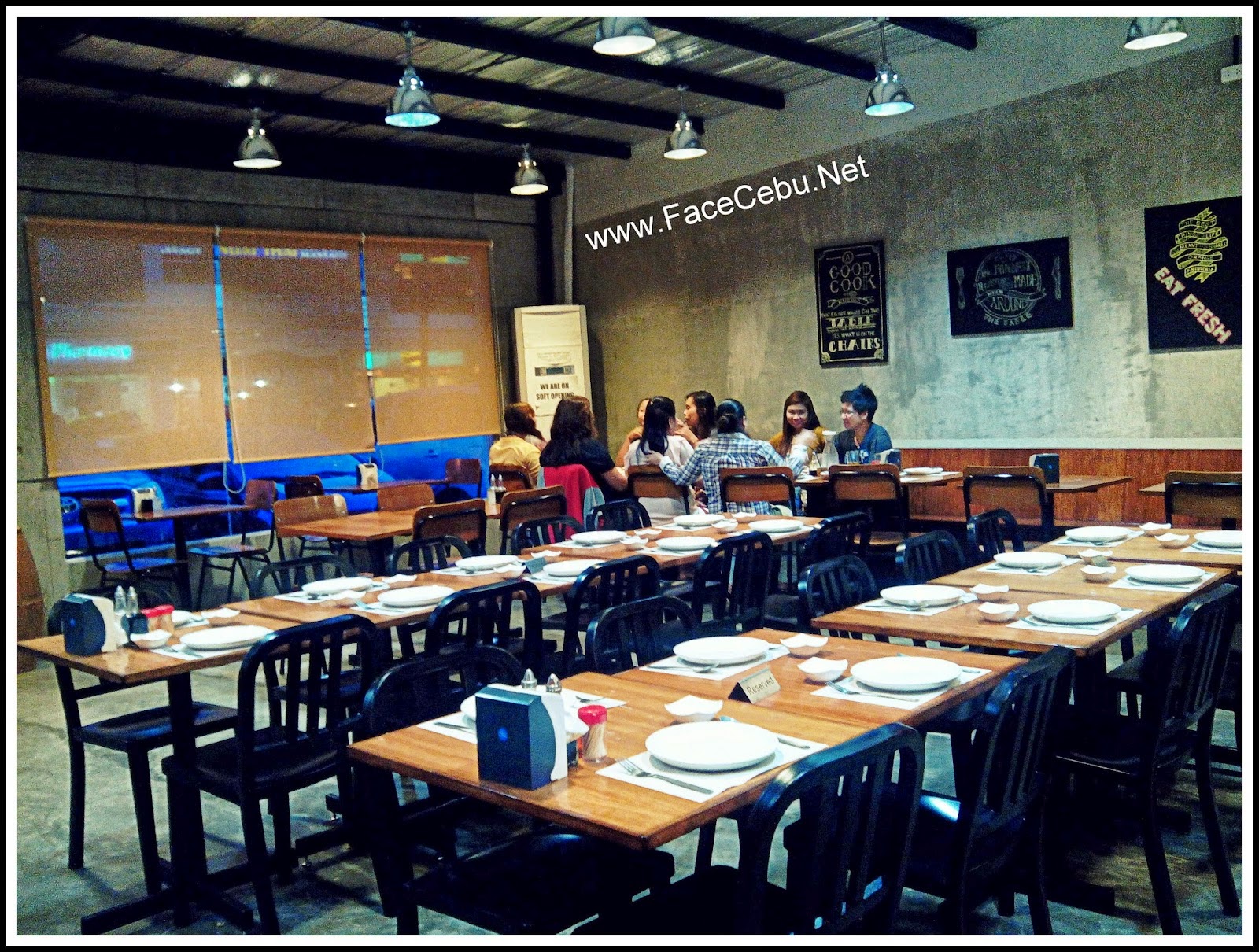 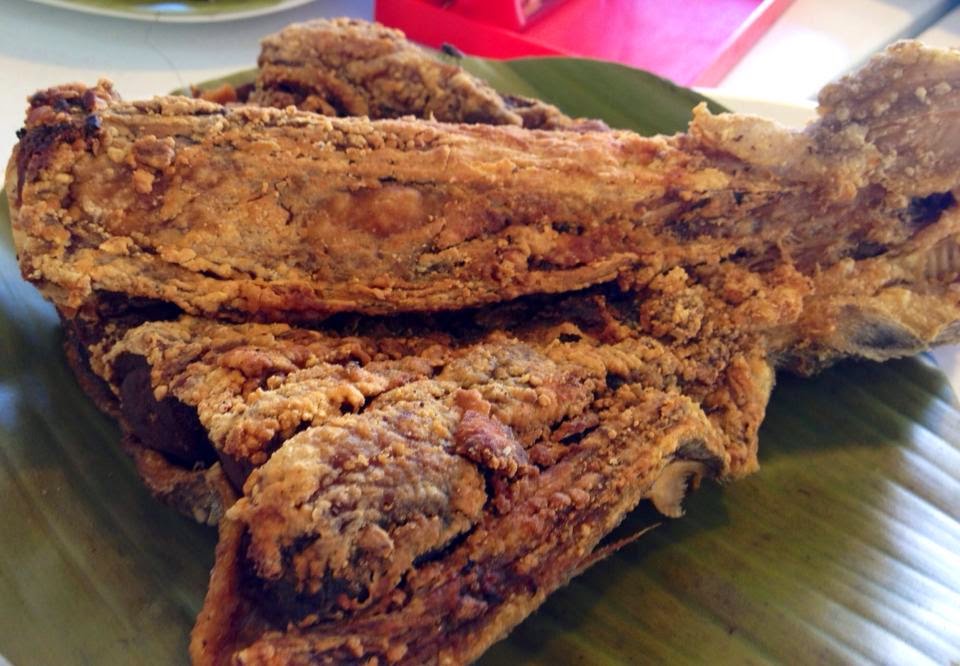 If you like Crispy Pata (deep-fried whole pork limb), you’ll be amazed how Orange Karenderia’s Crispy Buntot tastes very identical to its red meat counterpart. It’s no wonder then that their flagship dish is dubbed as the “Crispy Pata of the Sea”. This was easily a favorite for my family when I treated them for lunch during my birthday last year. I also love how this establishment innovated the carenderia concept, taking it to a higher level with cleaner, modern interiors. Other favorite dishes are their Larang, Betsy’s Garlic Chicken, Pinakbet, and Sinuglaw. 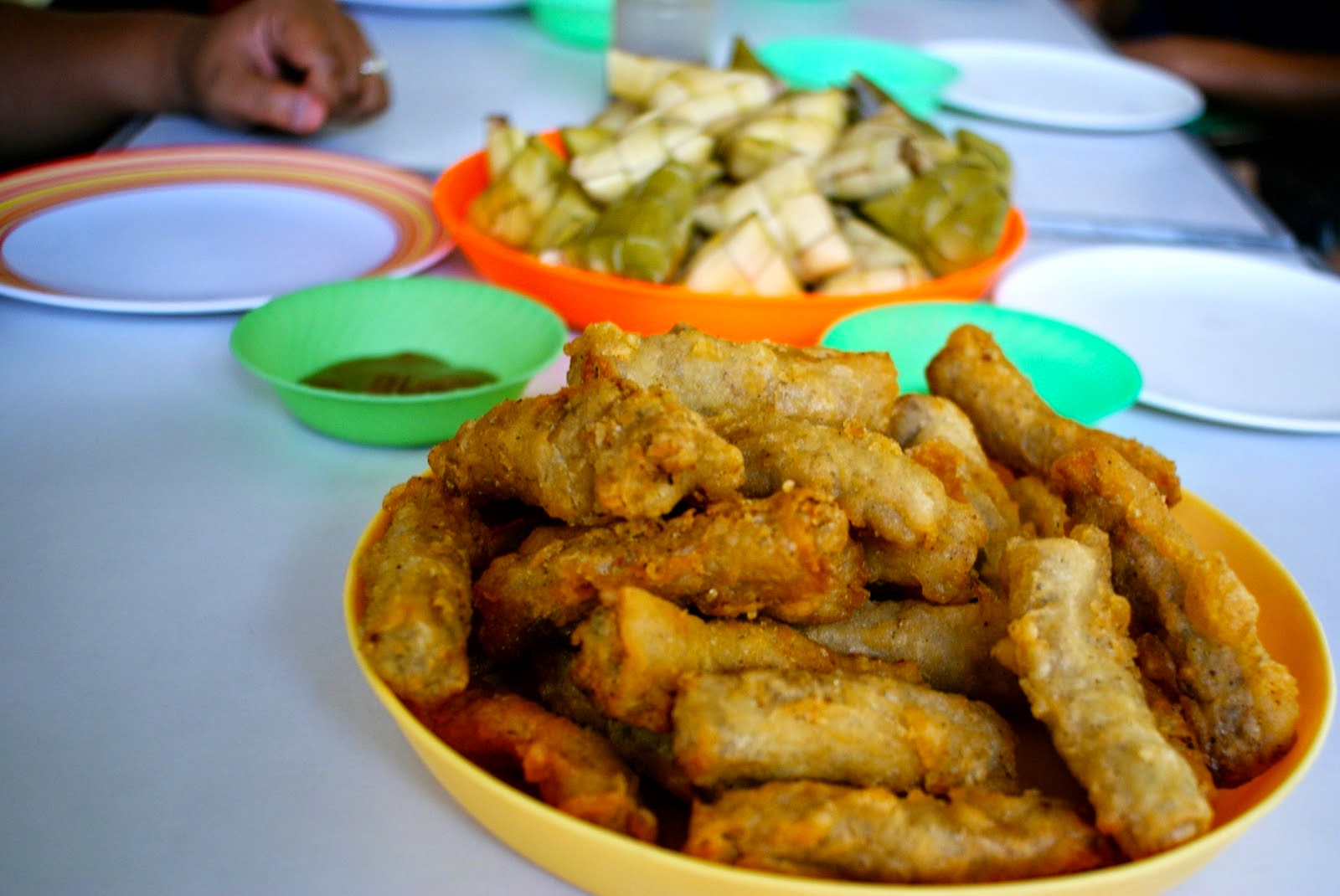 Something unique in Cebu is also our ngohiong. This is somewhat like a fried spring roll but has a distinctly thick, coarse wrapper and stuffed with seasoned bamboo shoots, vegetables, sometimes with ground pork, and a special sauce. Doming’s is a notorious hole-in-the-wall in Fairlane Village, Guadalupe known for their crispy, tasty ngohiong and fried native chicken.

They are only open for lunch, thus the wave of zombies diners attacking the place as early as possible. The waiting line is really long and the setting isn’t very sanitary and comfortable, so I suggest it’s best to call in your orders ahead and just have it for take out or take home. 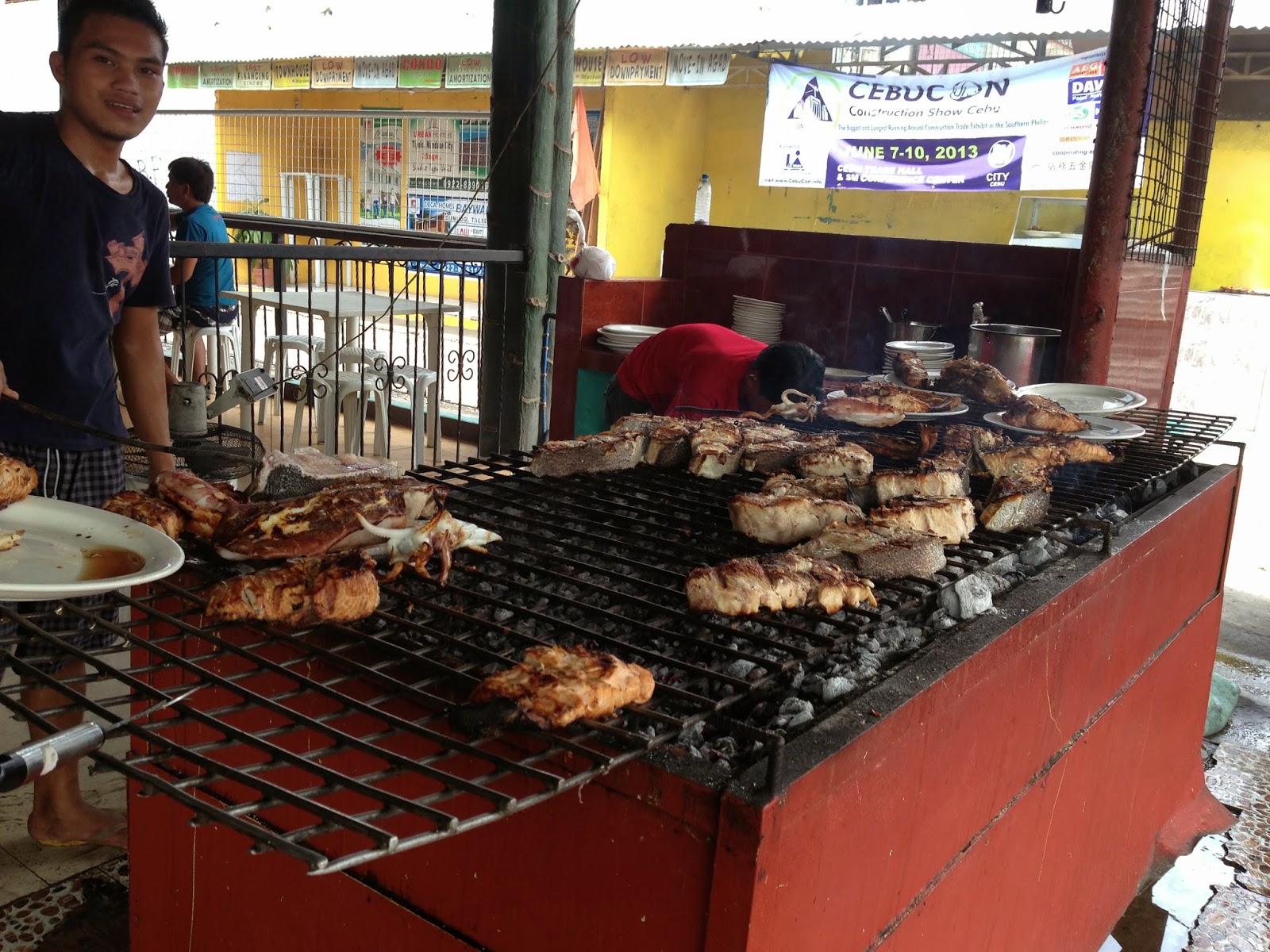 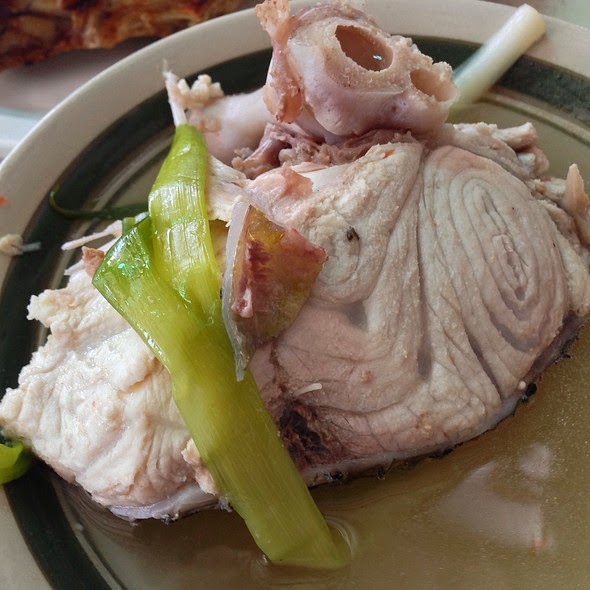 Cebu has a particularly distinct meal called SuTuKil or STK, which stands for Sugba (grill), Tuwa (soup), Kilaw (ceviche – fresh, raw fish cooked in the vinegar it is poured). This is one of the most commonly recommended dishes for tourists. This is actually a compound term for the trio of dishes prepared from one fish, usually from Tanguige (Mackerel), Mol-mol (Parrot Fish) or Lamon-lamon (Blackspot Tuskfish). It is an interesting display of skill in preparing different dishes from just one main ingredient.

My family’s favorite STK joint is Parrt Ebelle. What makes them stand out is their use of commercially rare, huge deep-sea fish such as Mamsa, Tasik, and Rumpi. My dad’s choice is Tasik for any of the Sutukil dishes because of its fine, flaky meat that remains juicy whether in soup or grilled. He frequents Parrt Ebelle for their tinola which only fares for P50 per serving. I, on the other hand, am a big fan of their steak-like, juicy grilled fish. Steak-like, because each serving is at least 2 inches thick and about 5 inches in length. It’s good for 2-3 persons.

It’s best to go there during lunchtime and be early so you won’t have difficulty getting a table. :)

You may read more about it on Sunstar's website by my favorite writer and editor, Luis Quibranza III. :) 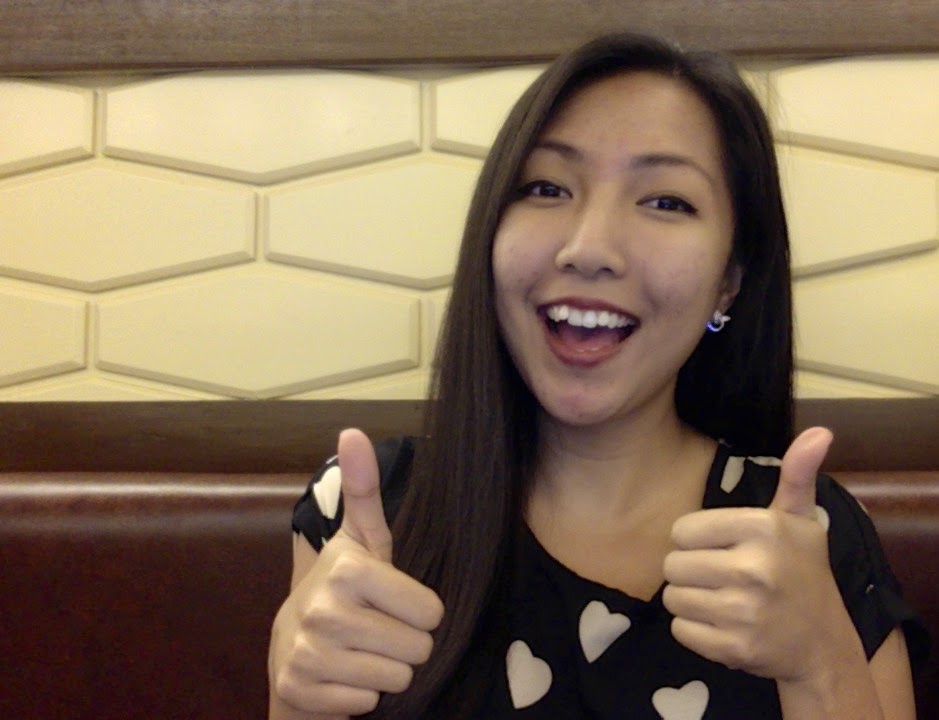 I know most people aren’t here just for the weekend so I hope this comprehensive list will help you make your stay worthwhile. Have fun! Cebu is delicious!

For the local readers, any other places or dishes you’d like to suggest for this list? I’d love to hear from you through comments on this post. :)